Original article appeared in the Courier Post on October 19, 2014 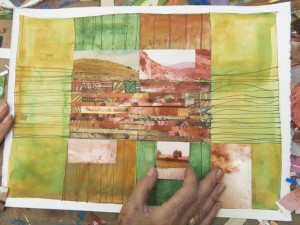 Fran Gallun can look at the clutter on the top of her workbench — things like recycled yogurt cups holding water and paint brushes, tiny caps of watercolor paints, scraps of foil, faded photographs — and whip them into art.

Sometimes she’ll use watercolors and pencils, and more often in her current favorite method, scissor-snipped strips of paper and doodle-like vertical sketches. The stuff that makes it stick together can be Elmer’s water-based glue.

A mixed-media artist, Gallun relies heavily on found items and recycled bits. When she pulls it together, in cylindrical columns or in 2-D work, she invites an onlooker to use imagination mixed with memories.

Gallun’s art ranges from landscapes speckled with images of sandy desert mounds in Israel, tabletops crammed with household items and flowers both living and dying.

The canvases and paper pull a viewer with a feeling of comfort and whimsy. If one thing doesn’t call out to your soul, move on a few feet.

The work can be gift card-sized or massive.

“Just so it fits into the station wagon,” she says.

Most are hung and balanced on shelving in a nearly 500-square-foot studio in Haddon Township’s SoHa building on White Horse Pike. More than one “shelf” that supports a bit of art is the top edge of a cardboard shipping box. She’s filled almost every space in the gallery with completed art work and has brightened some hallways of the two-story building dedicated to traditional artist space and to creative tenants including make-up artists, chocolatiers and bakers.

“You’re looking at 35 years of work,” says Gallun, who lives in Haddonfield.

Some of her favorite pieces are on view at the Cosmopolitan Club on Latimer Street in Philadelphia, a block from Rittenhouse Square. The show ends today.

Gallun, who previously worked in studios in Camden and Merchantville, grew up in West Philadelphia, and perfected her skill at the Philadelphia College of Art (now University of the Arts), the Pennsylvania Academy of Fine Arts, and later as both a student and teacher for 25 years at The Fleisher Art Memorial in South Philadelphia.

She also taught for five years at Rowan University and had been an artist in residence at Haddonfield Memorial High School. She curated shows at the Katz Community Center in Cherry Hill and had her work on display at Philadelphia’s Rosenfeld Gallery.

At this point, says Gallun, who chats continually as she walks a visitor through her gallery, she’s into a horizontal phase, with collages of thin strips of her own recycled work along with cut-outs from photographs from the 1980s, which are fading into sepia-like tones.

Some works include snips from her print-making days. They generate hints of archeology.

“I love this studio,” says Gallun, who was one of the first tenants in the SoHa space when it was re-created as a home for artists three years ago. She previously had used space in an area shared with potters, where there often was no heat and definitely no air conditioning. She told the SoHa landlord what kind of shelving she would need for her work, and insisted they not refinish the old wooden flooring.

“I used to do oils on canvas. Now, I’m working more on paper, creating collages. It’s about alchemy and hidden items and what’s underneath it all,” she said.

Recently Libby Rosof , who writes for theartblog.com, said Gallun’s work, while on display at The Philadelphia Museum of Jewish Art, showed “spiritual quests for connection to ancestors and the land.” The works, wrote Rosof, “capture the ripple of oasis mirages in the desert in breathtaking technicolors.”

The SoHa gallery space is a haven for many artists and professionals tied to the arts, so popular that there is a waiting list for spaces, said Lavon Phillips, who coordinates workspace and special needs with business partner Dominic Flamini.

“We started with 10 studios. Fran was working in the back of the space with broken windows and no heat. We had a plan for her. It was a mishmash, but she knew what she wanted and we built her studio around her. She’s a mentor for a lot of younger artists,” said Phillips.

The building on White Horse Pike has been through a variety of forms and uses since it was built in the early 1960s, said Flamini. It was home to uses as varied as batting cages and, recently, an upscale salon and spa.

Rent is based on square footage and includes most utility costs, security via 24-hour video, a strong Wi-Fi signal, parking and the option for tenants to involve themselves in community outreach programs like Art Within Reach.

To involve the neighborhood and show off the potential of Haddon Township as a magnet for artists, the gallery will sponsor a free outdoor screening of the movie “The Nightmare Before Christmas” at 6 p.m. on Oct. 24. Attendees under 18 are encouraged to go in costume. Gourmet concessions will provide food and adult attendees can bring their own beverages. Everyone should bring a chair.

This Christmas, artists will work together to create a Christmas village, opening Dec. 13 in the showroom that faces Haddon Avenue. Children enrolled in art and puppet-making classes will help with the design and creation.

Phillips said tenants include not just artists, photographers and interior designers, but party-planners and poets, bakers, cheese-makers, chocolatiers, a physical trainer and, most recently, a coffee roaster. A filmmaker has signed on as the next tenant, and studio space is available for hourly rental for photographers.

“We wanted to create a space for makers without pigeon-holing them. We give them the opportunity to make something with both their hands and their minds,” said Phillips.

Work stations include power and hand tools, a professional photo printer, exhaust fans, and a sewing machine — as well as two 3-D printers, are available to the tenants. The building is handicap-accessible and open for use by tenants 24/7, said Phillips.

It’s a location where children and adults can take classes on robotics and drones, candy making and art in every form. It’s been dubbed SoHa Smart because it welcomes “makers, artisans, revolutionists, and techies,” Phillips said.

Fran Gallun’s mixed media work will be on exhibit at The Cosmopolitan Club, 1616 Latimer Street, Philadelpha through Oct. 16. The building is open Monday through Friday from 10 a.m. To 4 p.m., and evening hours by appointment. The phone for the club is (215)735-1057.