It was 2012 and I was very involved and engaged with using the old photos of Israel, as well as making more monotypes to see how they would fit into the mix. 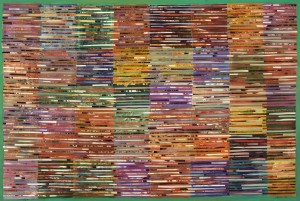 I was working on a large piece, which later came to be called “Many Worlds”, and as I often do when blocked; I start another one (or two).

I took a large piece of paper, 30×44, and painted it green, not having any idea of what would come next. Somehow I had the notion of painting squares about 3×3, and adding some kind of painted symbols into the squares. I saw pretty quickly that the symbol idea didn’t work inside the squares, so I tried using the thin strips of photos.

I didn’t plan any of the colors of the photos, just went along obsessively cutting and pasting, trusting my instinct for the right combinations.

I could see that the pattern I was creating was an optical play that made a satisfying surface. I call this one “Depth”. 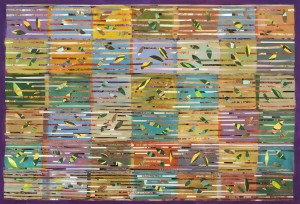 When one works, you must go onto a second!

So I painted the next paper purple, added the painted boxes, and began cutting the strips, but this time some leaves I had cut from monoprints and used on “Many Worlds” found their way onto this paper, and I loved the effect. Flickering leaves falling across the surface felt good to me. I glued them down and then adapted the strips around them. I call it “Flickering Depth.”

Somehow both these large pieces seem magical to me.

Recently I started another large piece and began with squares on painted paper. This time I have filled in the boxes with lines of colored pencil, creating a beautiful soft pattern. But, beauty is not enough! Action is needed!

This one has turned into a different kind of imaginary landscape, a close-up of lush plants in the foreground, desert mountains in the background. 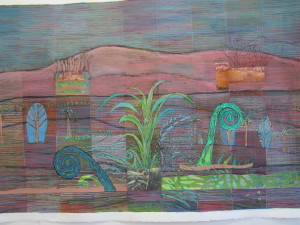 It’s so new that I haven’t named it yet.

So now it has a name: The Other Side of the Mountain.  I am quite pleased with it, although it is still a bit unfamiliar. I think it heralds a slight shift. We’ll see.

This summer it will be on view at the Fleisher Faculty show, which opens July 18, 2014.